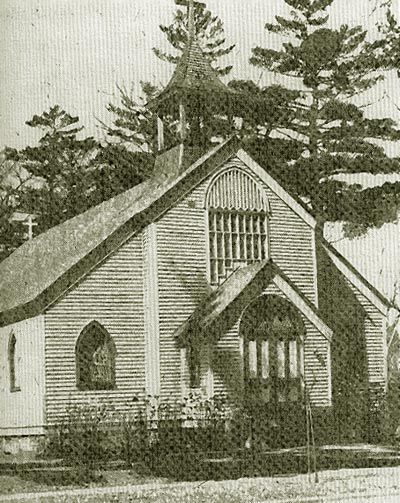 An enthusiastic layman started the work which led to the establishment of St. John's Episcopal Church in Shawano. Mr. John David Kast, a Waupaca churchman, settled in the town about 1875. On Sunday afternoons he gathered children together at his own house and taught them the  elements of his religion.

The first entry in the service record is full of interest: “The Rt. Rev. J.H. Hobart Brown, Bishop of the Diocese, accompanied by the Rev. Geo.H. Whitney, held the first services on Sunday, July 30th, 1876. The home is now “Heritage House,” a museum kept open by the Shawano County Historical Society. The first resident priest, Rev. Henry Truro, arrived in 1880 from the jurisdiction of Colorado and Wyoming. The parish was unable to support him, and he left after 10 months. Morning service was held at the house of J.D. Kast, one person was confirmed and the Holy Communion was administered, nine persons receiving. In the afternoon, service was held at the public school house where a large congregation assembled. The Bishop preached and baptized five children. A Sunday School was opened the following Sunday. J.D. Kast, Superintendent.” Very soon “Kast's Sunday School” became a thriving and popular institution with a roll of one hundred students and ten teachers. In these early days baptisms were a great feature and a proof of the aggressiveness of such faithful lay people as Mr. and Mrs. Kast, Mr. and Mrs. Chris Hill, Mr. and Mrs. Wm. Charnley, John Loan and Mr. and Mrs. Noah Wright. The home of Mr. and Mrs. Wright was for many years the hospitable headquarters of the visiting clergy.

For some years services were held wherever a hall could be obtained, settling down to a rented hall over a store. This hall was dignified by the new name of St. John's Hall and fitted for worship as far as possible. The need of a church building was evident and the desire grew without much material support until 1888. This period opens a new era for the church and marks the beginning of the regular visits of the Rev. L.D. Hopkins, then Vicar of Oconto, who faith and leadership placed the mission on a more stable basis. His oversight of the mission spread from April, 1888 to August, 1891. Plans for the building of a church were propagated by Bishop Grafton, Lawyer Dickinson of Shawano, and Father Hopkins. The building fund was started, and a reference to it and to other records shows that Fr. Hopkins turned practically all his receipts from the mission back into this fund. Bishop Grafton showed great interest in all the planning and aided materially in the building expense. In 1892 Mrs. George C. Smalley, a churchwoman, deeded to the church a piece of land almost covered with growing pines. Building started immediately and the stone foundations were laid in this setting of pine trees. In 1895 the church was built. Archdeacon Schepeler was in charge during the period of the actual building. During Father W.C. Bimson's tenure, in 1911, the vicarage was built. Bishop Grafton also assisted considerably in financing this project.

In 1921 the mission was taken over by the Rev. Francis W.G. Parker. During this time the property was improved by the addition of cement sidewalks and street paving. The Blessed Sacrament chapel was added during this time, fittingly furnished, which made possible the daily Mass for the first time.

From 1925 until the present the mission has had many priests. Most served for short periods, and some months there were no services but the doors were always kept open. In the 1920's and again in the 1940's the congregations were very large with 125 to 140 at Christmas Midnight Mass.  From 1925 to 1955 there were 72 Baptisms and 74 confirmations, also 50 burials and 15 marriages. In 1939 there were 84 registered members. 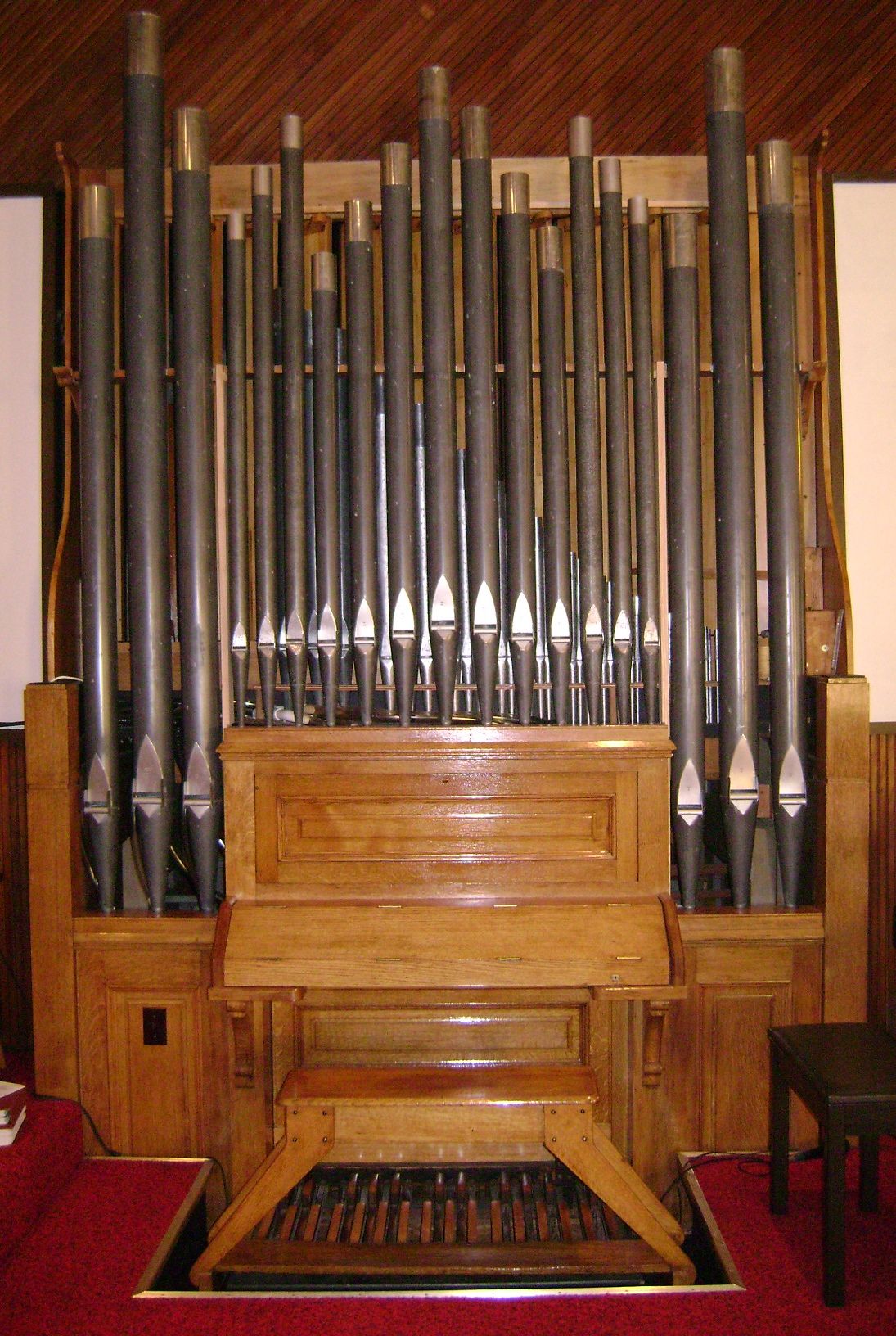 A Lancashire-Marshall pipe organ, originally built in 1890, was installed in the church in the early 1940's. The organ has been kept in excellent playing condition through the years, thanks to an endowment fund, The Sanderson family and Nancy Buss being principal contributors.

The present interior of the church is in contemporary liturgical style with a free standing Altar. A crucifix which was hand carved in Oberammergau, Germany hangs behind the altar, on a cross made by Father Joseph Minnis and parishioners.

The nave of the church is adorned with figures of the Blessed Virgin, St. Joseph and St. John, the patron saint.

Recently,  two corpus, Mary and John, came to us from Christ Church, in Green Bay, the oldest church in the Diocese, which was sold several years ago. They form the decoration for the Rood Screen. (The dividing line between the nave and the chancel.)

Also the 14 Stations of the Cross, hand carved of Linden Wood, on each wall, were given as a memorial in 1960.

An Italian bronze statue of the Virgin and Child, cast by Fonderia deVerona, is located outside the church near the front. The child holds the world in his hands and the Blessed Mother holds a dove, the symbol of peace.

The interior of the building has seen many changes. A new furnace was installed in 1926, a note has been found which proclaims “first time it was 70 degrees in church.” The furnace was again replaced in 1991, with zoned heating. In 1993 it was discovered the outside walls of the church were falling away, which was remedied with steel rods drawing the building together high across the nave.

In recent years the church has become increasingly more active in the community, with groups such as Alcoholics Anonymous and Gambler Anonymous meeting in our Parish Hall; a Youth Ministry on Sunday; Adult Study Group on Wednesday evenings; An annual sponsorship of a Shrove Tuesday pancake supper; with food pantry donations, donations to the victims of Hurricane Katrina, a Music Ministry,  a community garden, and involvement with local schools through volunteerism in athletics and tutoring elementary students.

Since July, 2002, St. John's has sponsored the Ecumenical Christian Grief and Loss Support Group of the Shawano Community Hospice at the Shawano Medical Center, led by Deacon Charles Daily. Subsequently his chaplaincy position has grown to include a Pregnancy Loss Support Group for women with experience in miscarriage, stillbirths and early infant deaths. Deacon Charles was the first chaplain to be employed at the hospital and the Pregnancy Loss Group is the first effort in Shawano County. Community Memorial Services are planned to start in the summer of 2008 facilitated by St. John's.

As part of the Green Bay Deanery, at the request of Bishop Russell E. Jacobus, St. John's participates by sending Deacon Charles Daily to represent the Bishop and Diocese on the Latino Council, and as a liaison.

The buildings, although over one hundred years old, are kept in good condition with improvements such as: new roofs, furnace and restroom updates, handicapped accessibility, new landscape elements and fresh paint.  St. John's is a vibrant, active church in the Shawano Community.